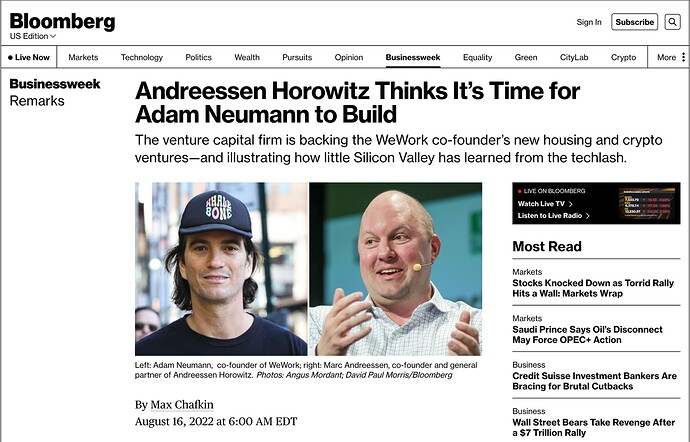 When Jason and I were doing fieldwork in Houston last October he had me watch the documentary about Adam Neumann and the rise of the WeWork unicorn. We both knew it was being spun - my guess was that the whole co-work, co-living, co-education program based on kibbutz was a set up for social impact housing with wrap around services.

Not sure if there’s a way we could do a group screening or maybe you could pull some clips @Jason_Bosch ? They seem to be coming on strong for sure now. The irony that Bloomberg of all outlets is feigning ignorance of what’s up. @leo

In April 2020, Marc Andreessen announced what sounded like a dramatic shift for his venture capital firm, Andreessen Horowitz. “It’s Time to Build,” he declared, arguing that investors and entrepreneurs should focus on making improvements in the physical world. He called for more investments in, among other things, constructing housing, which he said was becoming prohibitively expensive because of a lack of supply.

It sounded impressive, even inspiring. For years, Silicon Valley investors had drawn criticism for encouraging the industry’s brightest minds to build startups focused on privacy-eroding online advertising and for engaging in “regulatory arbitrage” rather than innovating—all while they tended to favor a group of toxic founders with an apparent propensity for grift. Andreessen was announcing a new era of seriousness of purpose. The techlash was over; the era of building had begun.

As it turns out, this new era of Silicon Valley tech looks almost exactly like the old one—all the way down to the socially conscious sleight of hand. On Aug. 15, Andreessen posted another essay about a substantial investment in a residential housing startup. Was he putting his money where his mouth had been and creating some futuristic way to build inexpensive, high-quality housing? Had he figured out how to defeat the “crony capitalism, regulatory capture, [and] ossified oligopolies” that he’d identified in his pandemic-era essay?

Well, no, not exactly. What he’d done is put $350 million into a startup called Flow—the largest venture capital check Andreessen Horowitz has ever written. Flow is said to be worth more than $1 billion, even though it isn’t entirely clear what the company does. Apparently its mission entails offering rental homes, while also, in Andreessen’s words, “rethinking the entire value chain, from the way buildings are purchased and owned to the way residents interact with their buildings to the way value is distributed among stakeholders.”

Given that word salad, it might not be surprising to hear that Flow’s founder is Adam Neumann, best known for creating WeWork, the epically overvalued office space startup that promised to bring tech company economics to commercial real estate while also attempting to “elevate the world’s consciousness.” Neumann lost his job amid allegations of incidental weed smuggling, tequila bottle throwing, self-dealing (which he denied), and so, so much cringe.

For his next act, the New York Times reported, Neumann has been buying thousands of apartments in Florida, Georgia, and Tennessee, which Flow will manage. Andreessen’s blog post was vague about how Flow would differentiate itself from other large residential landlords but said it would offer “community-driving, experience-centric services”—perhaps in the vein of Neumann’s ill-fated WeWork brand extension, WeLive—and would allow renters to build wealth. Given that Andreessen also invested in a Neumann-founded crypto startup, Flowcarbon, and given his enthusiasm for adding crypto tokens to everything, it seems likely that any wealth that renters create will be tokenized, too. Think Axie Infinity, but for your apartment.

Andreessen made no mention of construction as a way to make things better for renters—and why would he, given his recent opposition to the actual building of homes near his own? He also seemed more than a little out-of-touch as he tried to identify the flaws with the current rental housing market. Sounding very much like someone who recently paid $177 million for a home rather than someone who knows anyone who lives in a rental apartment, the venture capitalist complained that renters, unlike homeowners, “don’t generate any bond between person and place and without community, no bond between person to person.”

This all shows just how little Silicon Valley has learned after weathering years of criticism. Andreessen not only seems unbothered that Flow sounds like WeWork 2.0—from the weird interlocking web of ownership to the embrace of faddish tech to put a shine on what sounds like a very conventional real estate business—he actually seems intrigued by the prospect. “We understand how difficult it is to build something like this and we love seeing repeat-founders build on past successes by growing from lessons learned,” he wrote. “For Adam, the successes and lessons are plenty.”

The absurdity would make the investment in Flow look like just another instance of high-concept shitposting by a master of the craft, except that backing disgraced founders seems to be something of a current thing among the Valley’s top VCs. Travis Kalanick, the Uber co-founder who was ousted after creating a company prone to rule-breaking and sexism, has another startup, CloudKitchens, with a bro-centric culture, an Uber-like business model, and more than $1 billion in funding.

Michael Cagney, who left SoFi amid allegations of inappropriate behavior with female subordinates (which he’s denied), raised hundreds of millions of dollars for his new venture, as did Parker Conrad, who left his previous company, Zenefits, amid allegations that it had sold insurance without a license and that he’d presided over a freewheeling culture where employees had sex in the stairwells. His new company is in, more or less, the same business as his old one. Conrad has said he’s taking compliance more seriously. One assumes that the pandemic cut down on any stairwell sex.

None of this is exactly surprising, of course. For all the talk about an end of an era in Silicon Valley, investors like Andreessen have raised enormous sums of money over the past few years, and will have to write correspondingly large checks or face the unfathomable prospect of returning investor capital and giving up the kinds of hefty management fees that allow them to pay for their multiple mansions in Malibu.

Although WeWork and Uber pushed boundaries in ways that may have seemed morally dubious to civilians, it’s not clear that the leaders of the cult of disruption ever saw it that way. For Andreessen and his peers, in fact, the boundary pushing may be the point—evidence that someone like Neumann isn’t tethered to the normal rules of business. Boundary pushing, on the other hand, is not what you generally want in your landlord. What you want is cheaper rents—and Silicon Valley seems no closer to that goal than it was two years ago."

A blog post I wrote on social impact housing a few years ago. 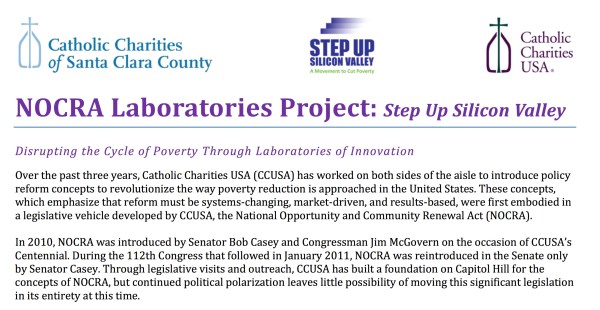 Silicon Valley Community Foundation, Part Four Click here for the introduction and parts one, two, three, and five. In a 2013 interview for the Mission Investors Exchange publication, “Community Fo…

And a video of me and my late friend Jennifer. 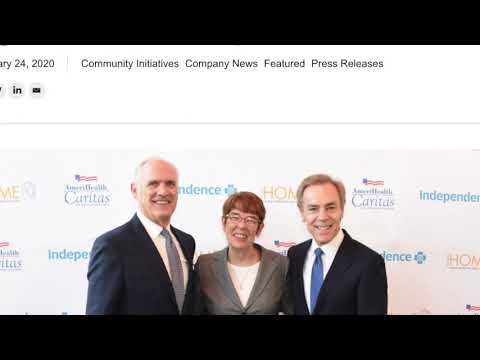 I think grabbing some clips and having a discussion about this “new” venture would be good. 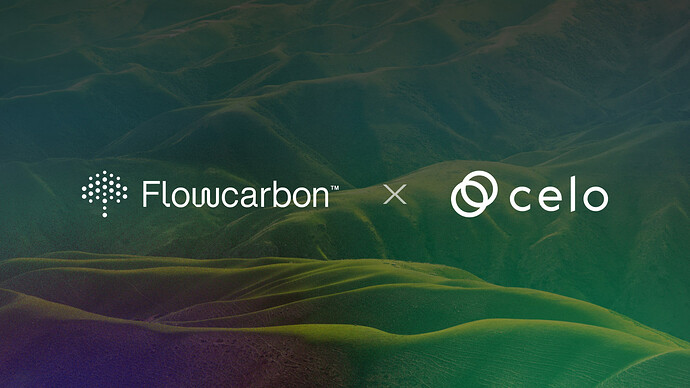 @Jason_Bosch given what I know about social impact finance in Tucson I think it’s more likely that that “anti-discrimination” rental bill is more about some policy measure they need for this new form of co-housing that will be paid for with some sort of conditional vouchers than actually protecting housing insecure people and giving them fair treatment under the law. That’s what I wanted to talk to Dru about.

@leo I am just reading about H.T. Odum’s mentor at Yale Evelyn Hutchinson who oversaw the translation of some of Vernadsky’s work on the biosphere… 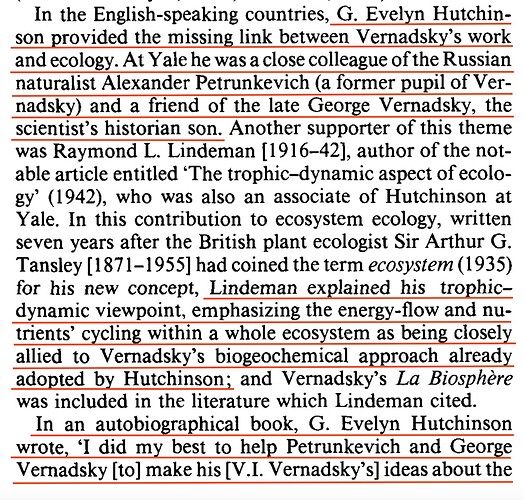 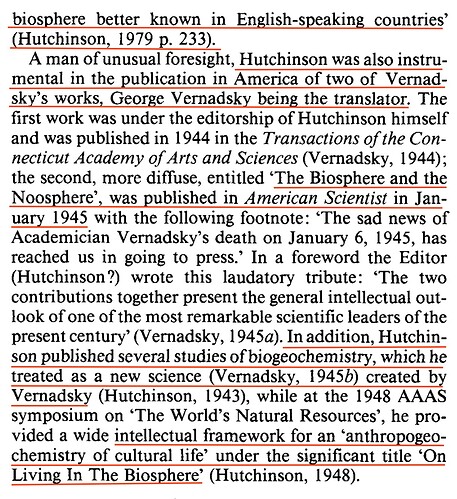 Odum was the guy who developed ecological economics and energy flow diagrams - UGA / Savannah River Ecology Lab. This diagram was of an artesian spring system in Florida in the 1950s.
https://www.notesonzoology.com/ecology/top-3-models-of-energy-flow-in-a-community-ecology/4220 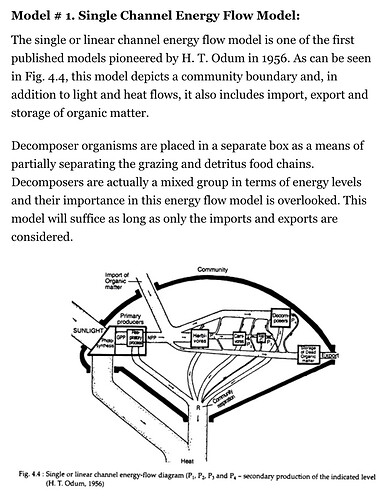 So really, the “Flow Carbon” concept dates back to Vernadsky’s early theories of bio-geo-chemistry with an energy economy attached. 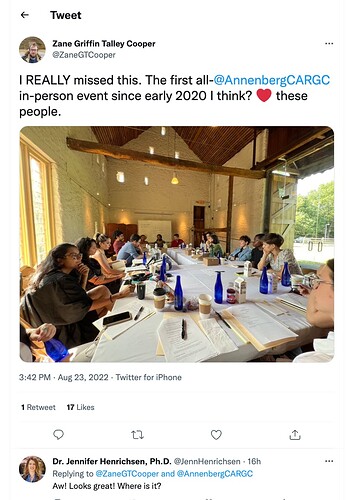 This guy is working on the International green New Deal Atlas. He was referenced in the recent Silicon Icarus post on Greenland and mining. It kills me that this tweet actually shows the interior of the barn at Bartram’s Garden where I worked for 17 years. Bartram working with Linnaeus on taxonomy of North American plants ends up here 200 years later. Damn. @leo @Jason_Bosch 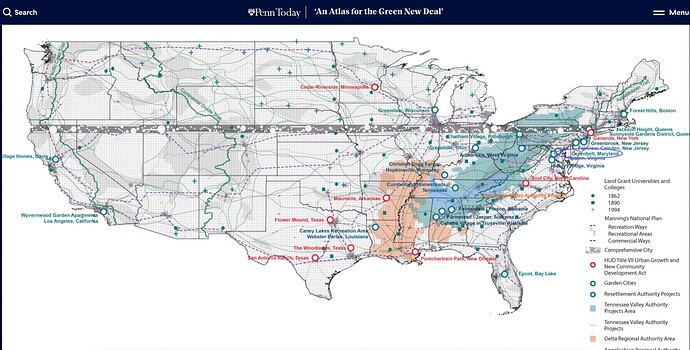 This article features planned communities. They will build off the Vernadsky / Hutchinson / Odum energy economy cybernetic framework. In the map I circled Greenbelt, MD where I did a site visit a few days ago.

We really need to refresh our understanding of capitalist run “enlightenment” socialist utopias like New Lanark. Many had Quaker ties, so the UPenn connection is again a legacy element. 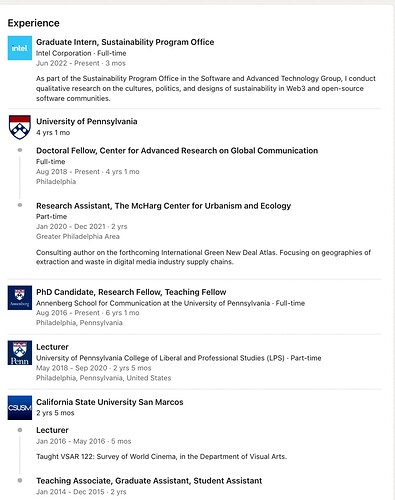 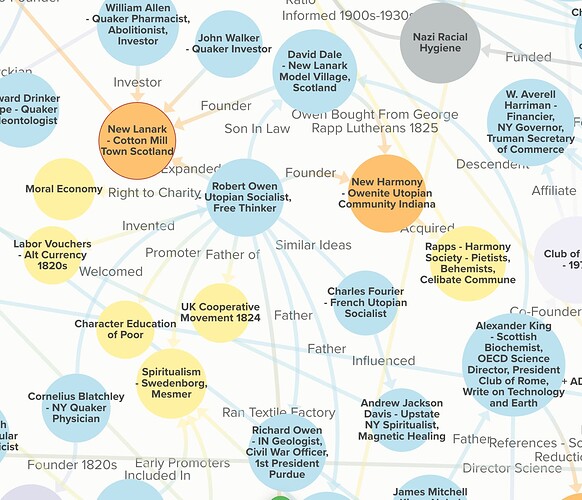 ‘An Atlas for the Green New Deal’ | Penn Today

The McHarg Center releases a new collection of maps and datascapes capturing the spatial consequences of climate change in support of a coordinated national response. 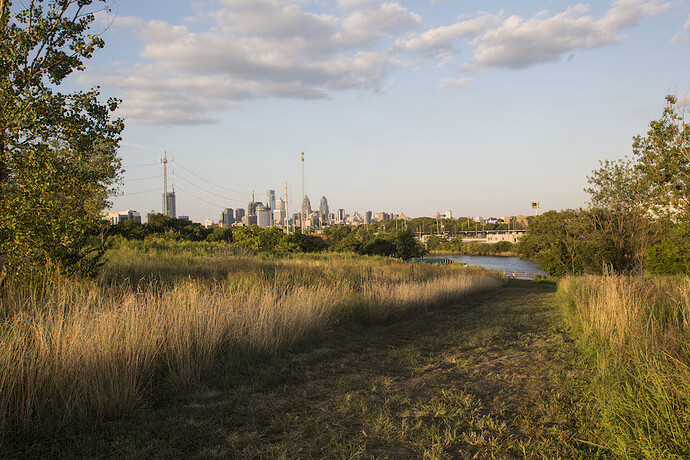 Reconnecting Horticultural History On The Schuylkill

Bartram's Gardens and The Woodlands will reunite through connective access when the westward extension of the Schuylkill River Trail is complete. Contributor Starr Herr-Cardillo traces the deep-seeded relationship between these two National Historic...