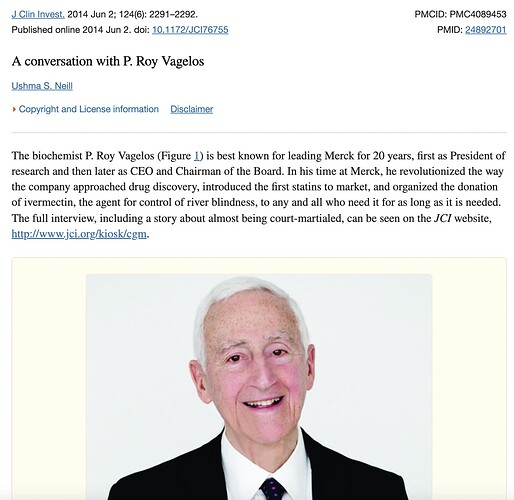 Ok, it is kind of weirding me out that Vagelos / Merck developed and donated Ivermectin to Africa in the 1980s and the family is now the major donor to UPenn in biomolecular engineering for alternative energy.

JCI: You are also behind another revolution: a Merck scientist discovered that ivermectin, which was originally developed as an antiparasitic for livestock, could potentially prevent river blindness in humans. You later pioneered the donation of ivermectin to anyone who might need it for as long as it was needed, for free. This was the first true pharmaceutical philanthropy.

Vagelos: Bill Campbell, one of our scientists, demonstrated that ivermectin could kill many parasites with a potency 100 times greater than any known drug at the time. In 1981, Mohammed Aziz, who had been in the WHO in sub-Saharan Africa, told me about river blindness and noted there were 18 million people who were infected and going blind because of a parasite called Onchocerca volvulus, with no good drug to prevent it. He suggested we try ivermectin, which was put into a tablet form named Mectizan. Mohammed went off to Dakar, Senegal, where he tested the drug in some of these patients.

This parasite exists as an adult worm that lives in the skin. The males get to be about four to six inches, the females about sixteen to eighteen inches. They live together in lumps about the size of a small ping pong ball in the skin and produce microfilaria. The microfilaria also migrate into the eyes, where they cause inflammation and ultimately blindness. Mohammed gave one tablet of Mectizan to each patient; then he returned in a month, and the microfilaria were gone. He came back to Rahway very excited. We talked with the WHO specialists, who said the results were probably wrong because there’s no way that a drug could eliminate all the parasites without causing serious side effects. We knew the results were correct, so we undertook a large development program, knowing that the people who might require Mectizan were among the poorest in the world.

JCI: Unfortunately, you couldn’t get any governments to help you defray the cost.

Vagelos: Our marketing people thought we could find a price that was feasible, especially by selling it to governments. But the governments had different priorities, and neither African nor the US government had money in the budget, even though we were only talking about $2 million at the start. By then, I was CEO, and I was meeting with the executive group trying to figure out how we were going to get this drug to the patients. The New York Times picked up the story. The magazine section had river blindness on the cover, and the story mentioned that Merck had a drug that was almost miraculous — and what was Merck going to do with it? So the pressure was on. Our executive group met and made a decision, then had a press conference in Washington to announce that the company would contribute Mectizan free to anyone in the world for as long as it was required.

I was invited back to Merck at the 25th anniversary of the program in 2012. I learned at that time that Merck treated about 200 million people that year for not only river blindness, but also elephantitis (another parasitic infection that could be controlled by Mectizan).

A conversation with P. Roy Vagelos 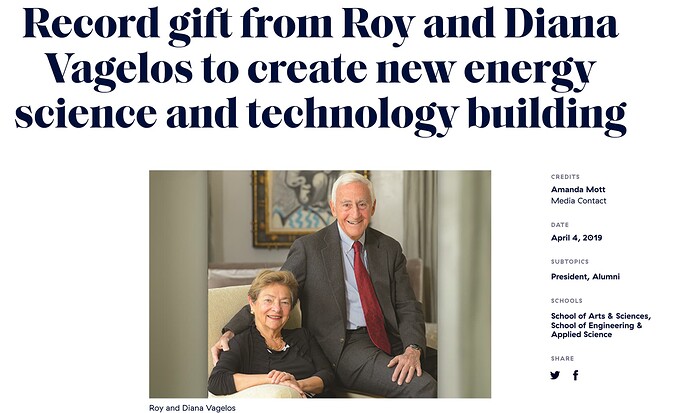 The new building will be named in honor of Roy and Diana Vagelos and located at 32nd and Walnut Streets. It will provide state-of-the-art research space that connects physical scientists and engineers. The new Penn Arts & Sciences and Penn Engineering facility will house the Vagelos Institute for Energy Science and Technology, which brings together researchers from both Schools to solve scientific and technological problems related to energy. It will also be a home for the Vagelos Integrated Program in Energy Research (VIPER), an undergraduate dual degree program run jointly by Arts & Sciences and Engineering."

The Ivermectin / River Blindness program was the World Bank’s first health project in 1974.

I don’t know if anyone has heard of birthday portals? I became familiar with them a couple of months ago from a youtuber called Astral Assassin, where she talks about them. It’s almost like we have more than one ancestry and by looking up our birthdays, we can see who we share a birthday with.

I looked up Roy Vagelos birthday and he is born on October 8th, which is the same day that Mark Oliphant was born. Mark Oliphant was instrumental in the development of first experiments with Nuclear Fusion. I just wonder if there is also energetic ties with people who share the same birthdays, as well as a energetic tie between pharma and nuclear.

If that’s the case I’m in big trouble because I got paired with Walt Disney, lol.

Oh lol, and Walt Disney also shares a birthday with Werner Heisenberg who influenced research int Quantum Mechanics and nuclear reactors, and we are researching and talking about these topics. It could just be fluff, or maybe there is a some strange energetic tie.

I have been looking into James Clerk Maxwell and picked up his book on Electromagnetism, and if I find anything appropriate I will share it in a post. Maxwell was born on June 13th and passed away on November 5.