Here’s an interesting talk by Professor Michelle Simmons given to the Royal Society of New South Whales on August 4, 2022. She titled her talk “Manufacturing at the Atomic Scale”. It starts at 09:28. 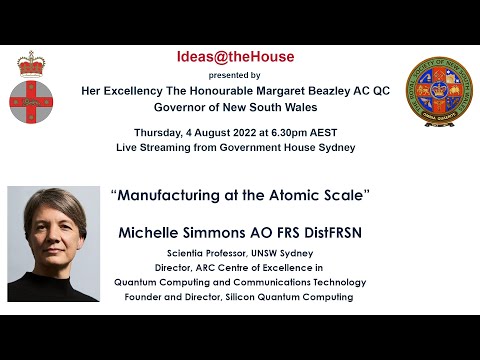 Michelle talks about her work on quantum computing. How in 2012 her team discovered a way to encode information onto one electron spin with an electric volt and turn it on and off creating the first single atom transistor. Then in 2021 they completed their first integrated circuit.

She goes on to talk about how this can be used for biomimicry of molecules, parallel computation, and for modelling. How quantum computing can be used for transportation optimization and encryption code breaking. At about 17 minutes she talks about nitrogen fertilizers, which you might find interesting @leo Then she talks about designer drugs that are going to target the problems people have in the human body by mimicking the molecules through simulation.

Michelle tells the story of having been visited by Michael Harte, who was at the time the CEO of Commonwealth Bank. How Michael and the bank then entered into a partnership as shareholders and they raised $83 million dollars for the project. I looked up Michael and he has sure been around in the banking world. He’s worked with Santander, Barclays, PNC (PFPC/Blackrock), Citi and Fonterra. All in top positions. And last year he joined up with United Ventures Capital.

In that article he talks about addressing environmental degradation and the threats of inequality. Because of course bankers and venture capitalists care so much. He also mentions the "(mis)management of the Covid pandmic. I wonder if he’s by chance friends with RFK, Jr.

@AMcD Oh, and he was also an MIT Research Fellow focusing on technology value, digital business models and transformative change.

“When the field of quantum computing came to the fore and it moved from being a theoretical idea to actually. Practically we can start to control the world at these small-length scales.” -Michelle Simmons

I think that gets to the heart of it, controlling the world. She also mentions about not having any boundaries in the way we think. Perhaps we should have boundaries?

I just cannot understand how people continue to believe that bankers, venture capitalists and Royalty ( On 10 June 2019, Michelle Simmons was appointed an Officer of the Order of Australia (AO) in the 2019 Queen’s Birthday Honours) have good and ethical intentions. Or even if they were well-meaning, have the wisdom to make such consequential decisions. The evidence over and over says otherwise.

They didn’t take questions from the audience at this event (because of Covid restrictions LOL) but she did field a few questions shared by the MC. One was about buying this technology (like a refrigerator?) and Michelle explains they sell access through the cloud (to their server farms). Of course the cloud computing industry is already huge but I think in the near future, the devices we buy and use will do less and less actual computing and will mostly just be interfaces accessing subscription based computing services with very restrictive terms and conditions. Everything as a service. 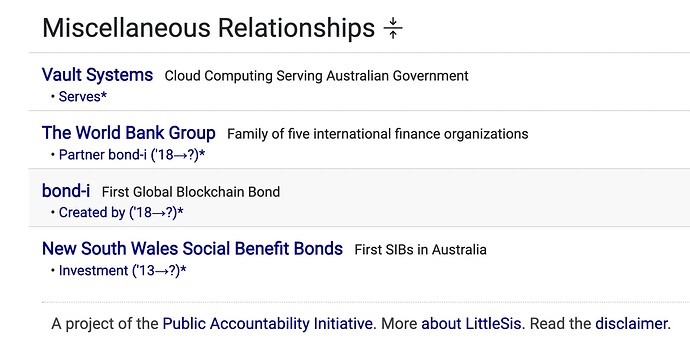 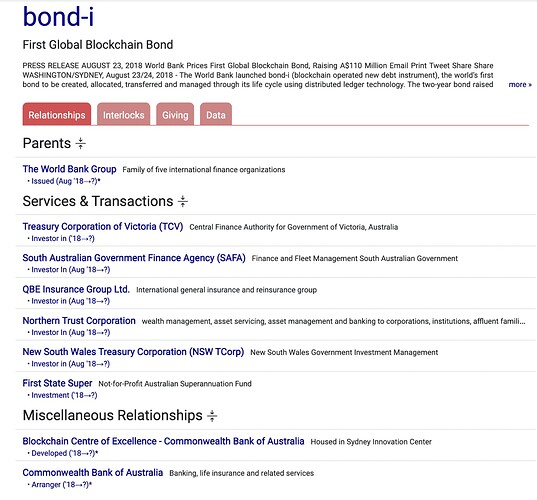 The map I had made a number of years ago but sadly deleted with no back-up by Littlesis, linked pay for success legislation and digital ID in NSW to the development on bond-i blockchain impact bonds being offered by the World Bank in partnership with Commonwealth Bank.
https://www.worldbank.org/en/news/press-release/2019/08/16/world-bank-issues-second-tranche-of-blockchain-bond-via-bond-i

Thanks for posting this Jason. I’m listening/watching more of her presentations to hear about the forecast use of quantum machines --such as Boston Consulting Group’s investment strategies-- and the actual How of making quantum machines, following up on the breakthrough experiments. I’ve got a sense of “DNA computers” and Simmons’s brand of hardware running neck-and-neck in development-- my prediction is DNA computing wins, but Simmons is certainly raising the bar.
‘Quantum Queen’ May 2012 British physicist Michelle Simmons, the 'quantum queen' - YouTube
Michelle Simmons June 2012 TED Quantum computation | Michelle Simmons | TEDxSydney - YouTube