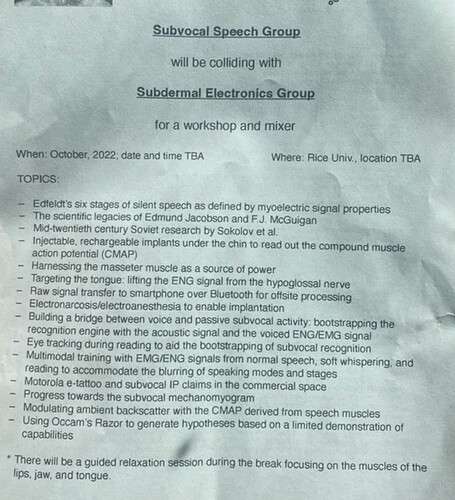 Someone linked to a blog post of mine on this reddit and I was curious, so I followed it back. Scrolling down I noticed this entry about Rice University, which we know has a lot of stuff going on.

r/conspiracytheories - somebody left this on my car

Also Edmund Jacobson. This is interesting @stephers re synesthesia, encoding, and word spells

The purpose of the project was to investigate the processes of “perception of single letters, the understanding of words, and of sentences.” Jacobson and his three collaborators acted as subjects. The subject was to open his eyes upon a card printed with a letter, a word, or a brief sentence, absorb as much of the experience as he could detail accurately, then close his eyes and give his report. These observers had much to say of internal events transpiring in that very brief interval, including sensations of color, auditory images of the sound of the letter, eye movements, and contraction and relaxation of the muscles of speech In one instance, an observer whose attention was diverted by a moving pendulum, reported kinesthetic images in the neck, as if following the swinging bob. Many of the reports were long and full of detail, providing a respectable account of the skills mastered by these early introspectionists.

He concluded that “for the most part, visual sensations aroused by the stimulus are not sufficient, of themselves, to constitute a perception of the particular letter; some additional process or processes must supervene.” Although at the time he was not ready to formulate it, the statements of the observations of activity in eye, speech and neck regions in connection with a simple reading task foreshadowed his position that the motor system plays a central role in mental activity.

A key element revealed in this early paper is the place of technical introspection in Jacobson’s system. Most workers of today are unaware of introspection, or consider it a quaint relic of a bygone era. Jacobson modified the techniques of introspection for his own purposes. As measurement devices for the physical sciences became increasingly sophisticated, psychology emulated physics by embracing objectivity, leading to the institutionalization of behaviorism and rejection of the subjectivity of introspection as unreliable. To Jacobson however, introspection offered access to the richness of the unmeasurable internal experience, and as his work unfolded, he unhesitatingly used introspective technique as the foundation for his method of relaxation. It is introspection, not relaxation, which through modifications and expansion, eventually became progressive relaxation. Introspection also proves one of the larger liabilities of the technique, providing, when behaviorism became the standard of the scientific method in psychology, a target for Jacobson’s critics."

BTW again @Stephers in the Orson Scott Card books Ender speaks with “Jane” the AI through subvocalization. Card emphasizes that often in the series.

Picking out this item from Frank Joseph McGuigan’s bio: ….”In 1990, [until his death in 1998] he was selected to be distinguished research fellow at the Naval Health Research Center in San Diego. McGuigan’s primary interest was developing the concept of cybernetics within the body to explain the functioning of the mind. He was interested in applying the results of his laboratory studies to real-world problems. He published 26 books and over 90 journal articles from 1953 to 1998 in multiple areas, including theory, conditioning, education, stress, and electrophysiology.”

“NHRC was established in June 1959 as the U.S. Navy Medical Neuropsychiatric Research Unit (NMNPRU). The first formal longitudinal research study started in spring 1960. In 1974, by authority of the Chief of Naval Operations, NMNPRU was re-designated as NHRC, with the mission to study medical and psychological aspects of health and performance.” Naval Health Research Center

—Next is the “ground zero” scenario for the 2009 swine flu pandemic-that-wasn’t. What the CDC does not elaborate is that the outpatient ‘border’ clinics to which the child patients were taken were part of a surveillance network of clinics operated by the Naval Health Research Center itself.

Patient A. On April 13, 2009, CDC was notified of a case of respiratory illness in a boy aged 10 years who lives in San Diego County, California. The patient had onset of fever, cough, and vomiting on March 30, 2009. He was taken to an outpatient clinic, and a nasopharyngeal swab was collected for testing as part of a clinical study. The boy received symptomatic treatment, and all his symptoms resolved uneventfully within approximately 1 week… Public health officials are conducting case and contact investigations to determine whether illness has occurred among other relatives and contacts in California, and during the family’s travel to Texas on April 3, 2009.

“Patient B. CDC received an influenza specimen on April 17, 2009, that had been forwarded as an unsubtypable influenza A virus from the Naval Health Research Center in San Diego, California. CDC identified this specimen as a swine influenza A (H1N1) virus on April 17, 2009, and notified the California Department of Public Health. The source of the specimen, patient B, is a girl aged 9 years who resides in Imperial County, California, adjacent to San Diego County. On March 28, 2009, she had onset of cough and fever (104.3°F [40.2°C]). She was taken to an outpatient facility that was participating in an influenza surveillance project, treated with amoxicillin/clavulanate potassium and an antihistamine, and has since recovered uneventfully…

As of April 21, 2009, no epidemiologic link between patients A and B had been identified, and no additional cases of infection with the identified strain of swine influenza A (H1N1) had been identified. Surveillance data from Imperial and San Diego counties, and from California overall, showed declining influenza activity at the time of the two patients’ illnesses. Case and contact investigations by the county and state departments of health in California and Texas are ongoing. Enhanced surveillance for possible additional cases is being implemented in the area… Swine Influenza A (H1N1) Infection in Two Children --- Southern California, March--April 2009

—I’ve got a lot of information about influenza surveillance and the neuro-invasive damage caused by various types of flu, but adding McGuigan into the mix is new to me and highly suggestive of ideas about using viruses (nano-bio-thingies) for cybernetic adaptations. I’ll be checking him out-- thanks @AMcD

I look forward to hearing more.

McGuigan’s research certainly has applications in behavioral metrics, laying groundwork for mapping the integration of body-mind through neuromuscular signaling, or “covert” behavior.

Memorializes F. J. McGuigan. The core of McGuigan’s empirical and theoretical research focused on the explication of cognition through the measurement of covert, principally, muscular, behavior. He emphasized the importance of creating a science of covert behavior and began to develop and promote the evolution of cognitive psychophysiology from a compendium of mentalistic rationalization to a firm database of studies of covert behavior. He became a leading authority on the principles of progressive relaxation. (APA PsycInfo Database Record (c) 2016 APA, all rights reserved) APA PsycNet

—Here’s a sample paper: Imagery and Thinking: Covert Functioning of the Motor System

[Jan 1978] “In numerous studies, it has been found that a variety of bodily systems are covertly activated during cognition. Excellent accounts of brain functioning during thought may be found in Delafresnaye (1954), Eccles (1966), and more recently Young (1970). An instance of a strong centralist position is that of Lashley (1958)”…

—and another: Covert behavior as a direct electromyographic measure of mediating responses

[Jul 1971]”Electromyographic (EMG) measures (in addition to eye activity, and electroencephalograms, EEG) were taken from the tongue and arms of children under conditions of verbal oral mediation, non-oral (leg and arm) mediation based on the concepts of right and left, and no-mediation. It was found that amplitude of tongue EMG (a measure of covert oral behavior…”

Above citations are from the listing here (44 papers) https://www.researchgate.net/scientific-contributions/F-J-McGuigan-78336373

McGuigan appears to be equally focused on the covert behavioral stimuli of processing nontext imagery, but I haven’t quite tapped into those papers. He was a regular at the Pavlovian Society meetings through his career and wrote several of their reports.

“The Pavlovian Society was established in 1955 by W. Horsley Gantt, at a ceremony held to commemorate the 25th anniversary of the founding of his Pavlovian Laboratory at Johns Hopkins School of Medicine in Baltimore, Maryland. On May 7, 1955, at the conclusion of the 25th anniversary ceremony, the Society’s first meeting was held. The meeting was attended by Gantt, Howard Liddell, Edward Kempf, David Rioch, and William G. Reese. The agreement reached at that meeting was for the society’s membership to be initially limited to thirty-five people.[3] Early in its history, the Pavlovian Society held its annual meetings in or near Baltimore and/or New York City, but this began to change as the society began to attract more members from other countries.[4] John J. Furedy, a former president of the society, claimed that it was unique among psychological learned societies in being truly open to “genuine debate and discussion”, which he argued was representative of a pre-Socratic philosophy.[5]

William Andrew Horsley Gantt (24 October 1892 – 26 February 1980)[1] was an American physiologist and psychologist. At the time of his death in 1980, he was one of only two surviving students of Russian physiologist Ivan Pavlov.[2] He spent fifty-six years of his career extending Pavlov’s seminal experimental research on classical conditioning… In 1913, he enrolled at the University of North Carolina, from which he received his B.S. degree in 1917. He then attended the University of Virginia, from which he received his M.D. in 1920… In 1922, Gantt began working for the American Relief Administration in Petrograd, Russia, where he studied the health effects of famine and war…” W. Horsley Gantt - Wikipedia

–The American Relief Administration was the successor agency to the Committee for Relief in Belgian, Herbert Hoover’s WWI gig.