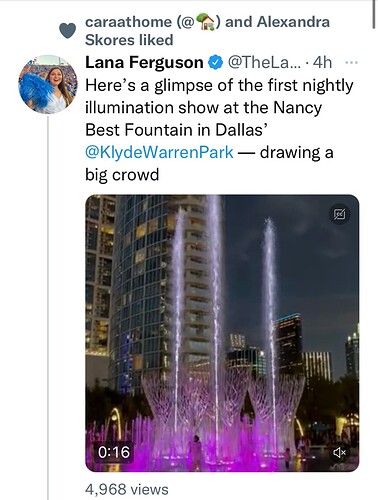 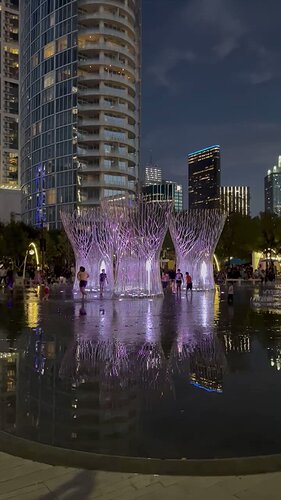 Randy BEST is the father of digital learning at the college and higher Ed level. Tied to the Boosh family 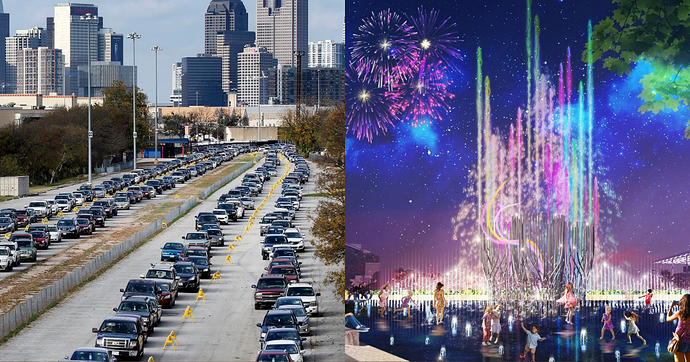 Nancy Best Blew $10 MILLION On A Water Fountain In Dallas During A Global...

Klyde Warren Park in downtown Dallas is getting a ginormous 'super fountain' that will be soon be the world's tallest interactive fountain. The fountain is capable of shooting jets of water up to 95 feet high and columns of water 100 feet in the air....

Klyde Warren Park in downtown Dallas is getting a ginormous “super fountain” that will be soon be the world’s tallest interactive fountain .

The fountain is capable of shooting jets of water up to 95 feet high and columns of water 100 feet in the air. It will feature a central island of three stainless steel trees from which water will pulse and jet. The base of the fountain will have a shallow, highly reflective splash pool. At night, this insane fountain will have colorful light shows with streams of water synchronized to music.

This absolutely absurd fountain is all thanks to a generous $10 million Christmas gift from park board member Nancy Best and her husband, Randy, the park said in a news release this week.

Ilumno owns and operates top universities across Latin America in an effort to expand access to top quality education in the region. Through its network of partner institutions in Brazil, Chile, Colombia, Panama, Argentina, Costa Rica and Paraguay, Ilumno serves over 250,000 college students of all socioeconomic classes. To learn more, please visit ILUMNO :: Transforming how the world learns

ILUMNO :: Transforming how the world learns 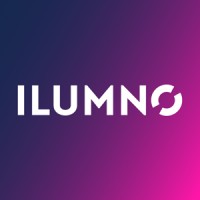 Randy Best is an American education entrepreneur and conservative political donor. Best was born and raised in Beaumont, Texas, the son of a hardware store owner and a teacher. In 1967, Best graduated from Lamar University, where he majored in political science after switching from pre-law. While a student at Lamar, Best started a jewelry business which he later sold for $12 million. After selling the business, Best pursued several different ventures, including art galleries, clinics, cattle ya... 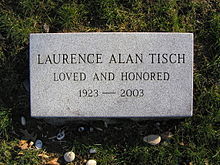 Laurence Alan Tisch (March 5, 1923 – November 15, 2003) was an American businessman, investor and billionaire. He was the CEO of CBS television network from 1986 to 1995. With his brother Bob Tisch, he was part owner of Loews Corporation. Tisch was born March 5, 1923, in Brooklyn, New York, the son of Sadye (née Brenner) and Al Tisch. His father's parents had emigrated from Ukraine and his mother's parents from Poland. He was of Jewish descent. His father, a former All-American basketball play... 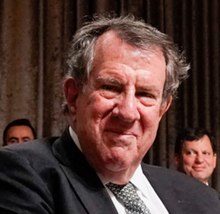 Andrew Tisch (born 1949) is the co-chair of Loews Corporation, the company founded by his father Larry Tisch and uncle Bob Tisch. Together with his brother, James S. Tisch, and his first cousin, Jonathan Tisch, Andrew oversees a holding company involved in hotels, oil, and insurance. Tisch was born in 1949, the son of Wilma "Billie" (née Stein) and Laurence A. Tisch. Both his parents were of Jewish descent. He has three brothers: James S. Tisch (born 1953), Daniel Tisch (father of David Tisch), ...

David Tisch (born 1981) is a businessman and angel investor based in New York City. He is managing partner of BoxGroup, a seed-stage capital firm, and a co-founder of TechStars New York City. He is the grandson of American businessman Laurence Tisch, co-owner of Loews Corporation. His great-uncle, Preston Robert Tisch purchased the New York Giants, now co-owned by Steve Tisch, who produced the films Forrest Gump and Risky Business. Tisch was born and raised outside of New York in Westchester Cou...

Tisch began his career heading up interactive strategies at kgb.[10]

In 2007, Tisch founded BoxGroup, a technology investment firm that has invested in 250 companies including Vine, Warby Parker, Handy, and GroupMe.[9][5] BoxGroup is personally funded making Tisch one of the most active angel investors in the United States.[11]

Tisch co-founded the Techstars New York City program, a startup accelerator program, and became managing director in 2010.[12][9] During his tenure, he helped lead some of the most successful investments in the history of Silicon Alley startups.[13] Under his direction, companies in the program raised more than $100 million in follow-on capital. Tisch left TechStars in 2012.[13]

Tisch became a member of Mayor Michael Bloomberg’s Council on Technology and Innovation in 2011.[14]

In August 2014, Tisch co-founded Spring, a mobile marketplace allowing consumers to shop directly from brands.[15][16] Investors include BoxGroup, Google Ventures, and Yuri Milner.[15][17] Apple listed Spring as one of the best apps for 2014.[18]

Tisch was named head of Cornell Tech’s Startup Studio program in December 2014. Startup Studio is an experiential learning graduate program that teams students from different disciplines to develop an idea into a product

kgb (stylized in lower case) is a privately held, New York-based company that provides directory assistance and enhanced information services across Europe and North America. It describes itself as "the world’s largest independent provider of directory assistance and enhanced information services." Founded in 1992 by Robert Pines under the name INFONXX, the company rebranded in 2008. The term knowledge generation bureau is from an advertising copy line, and is not the name of the company, whic In...

Techstars is a global investment business that provides access to capital, one-on-one mentorship, a worldwide network and customized programming for early-stage entrepreneurs. It was founded in 2006 in Boulder, Colorado. As of May 2022, the company had accepted over 2,900 companies into its accelerator programs with a combined market capitalization of $71bn USD. Techstars was founded in Boulder, Colorado, by David Cohen, Brad Feld, David Brown, and Jared Polis in 2006. Initially, Techstars inve... 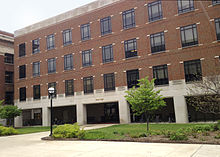 Preston Robert Tisch (April 29, 1926 – November 15, 2005) was an American businessman who was the chairman and—along with his brother Laurence Tisch—was part owner of the Loews Corporation. From 1991 until his death, Tisch owned 50% of the New York Giants football team and shared ownership of the team with Wellington Mara. Tisch was born in 1926 in the Bensonhurst section of Brooklyn, the son of Sadye and Al Tisch. Tisch received a BA degree in economics from the University of Michigan in 1948, ... 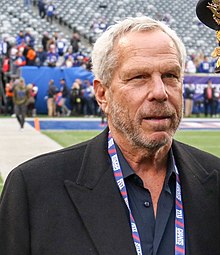 Steven Elliot Tisch (born February 14, 1949) is an American film producer and businessman. He is the chairman, co-owner and executive vice president of the New York Giants, the NFL team co-owned by his family, as well as a film and television producer. He is the son of former Giants co-owner Bob Tisch. Tisch was born in Lakewood Township, New Jersey, the son of Joan (née Hyman) and Preston Robert Tisch, a film and television executive who also served as the United States Postmaster General. He... 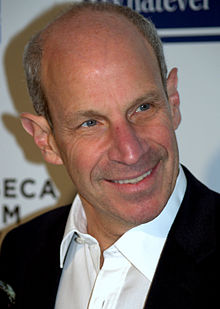 Jonathan Mark Tisch (born December 7, 1953) is an American businessman. He is the CEO of American luxury hospitality company Loews Hotels. Tisch is also a trustee of Tufts University, and a board member of the Tribeca Film Institute. He is a co-owner, of the New York Giants. He served as co-chairman of the 2014 NY/NJ Super Bowl host committee. Tisch was named chairman of Loews Hotels (a wholly-owned subsidiary of Loews Corporation) in 1989. Tisch initiated the Loews Hotels Good Neighbor Polic...

Alison has a trusty map of Best tied to the former chancellor of Dallas College where I ran for a seat on the board in May. That chancellor brought us the major no-bid deal struck with GreenLight Credentials blockchain life lockers.

A hurricane triggered his involvement. It’s almost like they can direct them by remote control. Randy Best Is Going to Save Texas' Public Universities, Or Get Rich Trying - The Texas Observer

A tornado blew through Dallas and ignited a foundation after the tornado decimated a high school.

Then there was Katrina and the Louisiana parish where the waters hadn’t even receded when they kicked in to bring charter schools.

I have not yet found a millionaire, billionaire that is not on board with all the Web3 and online learning education initiatives. This includes many rich and famous celebrities in entertainment and sports. Truly a David and Goliath under taking we are up against. Does not matter though, we can make a difference to keep this seed of reality alive for the coming generations. We are the spark!

When I am feeling a little bit defeated this part of the poem called Spark by Charles Bukowski keeps me going.

I knew that I was dying.
something in me said, go ahead, die, sleep, become
them, accept.

then something else in me said, no, save the tiniest
bit.
it needn’t be much, just a spark.
a spark can set a whole forest on
fire.
just a spark.
save it.

I think I did.
I’m glad I did.
what a lucky god damned
thing. 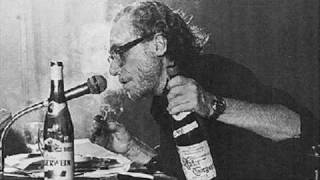 “For those who believe in God, most of the big questions are answered. But for those of us who can’t readily accept the God formula, the big answers don’t remain stone-written. We adjust to new conditions and discoveries. We are pliable. Love need not be a command nor faith a dictum. I am my own god. We are here to unlearn the teachings of the church, state, and our educational system. We are here to drink beer. We are here to kill war. We are here to laugh at the odds and live our lives so well that Death will tremble to take us.”
― Charles Bukowski