So I’ve been working to understand the concepts of molecular engineering and energy-based economics. I’m really not getting it. Does anyone have insights into this?

" Koopmans’s early works on the Hartree–Fock theory are associated with the Koopmans’ theorem, which is very well known in quantum chemistry. Koopmans was awarded his Nobel memorial prize (jointly with Leonid Kantorovich) for his contributions to the field of resource allocation, specifically the theory of optimal use of resources. The work for which the prize was awarded focused on activity analysis, the study of interactions between the inputs and outputs of production, and their relationship to economic efficiency and prices."

Can you all see the above linking to this grant by the John Templeton Foundation on goal-directed behavior (gamificaiton?) of chemical processes? @leo @Stephers @Jason_Bosch
https://www.templeton.org/grant/the-origins-of-goal-directedness-a-formal-scenario-based-on-chemical-organization-theory-and-cybernetics 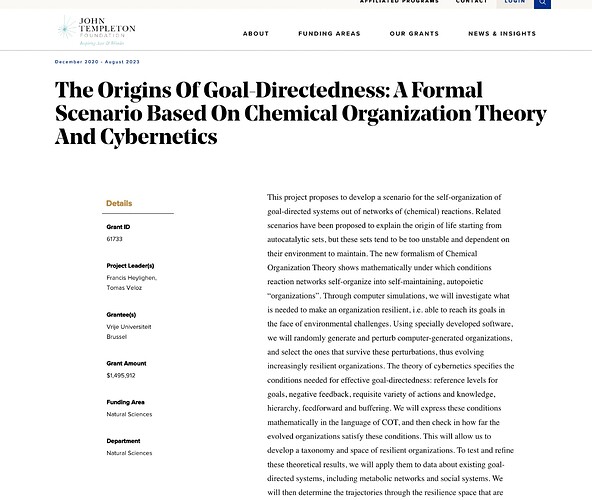 To me it seems like the Templeton grant is about simulating the process of chemical self organization, and by adding a ‘goal directed’ focus, transmute the lessons of that self organization in a cybernetic system.

As cybernetics is the study of control, intuitively it seems that a control perspective needs some specific goal, either positive or negative (I don’t mean morally, positive meaning doing something, and negative meaning not doing ’ something). Hence the ‘net zero’ or impact metrics.

The quantum chemistry stuff, from my understanding, is about having a model for essentially electron behavior. As from Broglie and others, all particles have an wave form. Electron orbital theory describes the different “shells” of electrons around an atom, those shells are basically described in wave function equations that describe energy levels. The Xray stuff comes from that see Moseley's law - Wikipedia which showed that the square root of xray frequency emitted from an atom equals its atomic number (number of protons, periodic table)

So Its logical that if you wanted to build a economic control system based purely of “science” or “natural laws” run by computers you would need to have these mathematical descriptions of energy levels/behavior of all major atoms. But Im reading the theory of optimal use of resources paper and I really dont get it ahah so I’m not sure if what I am saying will help with that.

My sense is that “optimal use of resources” is being encoded into the gamified platform. Picture the Chicago Boys running your metabolism or the carbon cycle of an ecosystem using today’s version of radio-isotopes for digital feedback / real time data analytics - I guess now that’s nano.

What I’m trying to do is pull away from the “technocracy” crowd’s vision of an energy-control financial system imposed by “socialists” and pivot to the history of thermoeconomics linked to ecosystem function. In that way that Brookings interspecies currency gets a lot more interesting.