McKinsey Consultant Cashes In On School In A Video Game 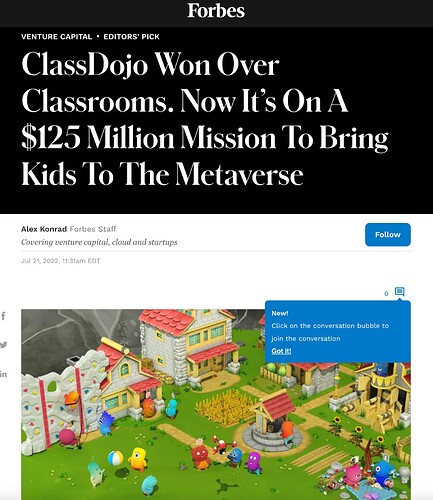 Venture capital being poured into “schools” in a video game. Initially used for in-school classroom management / behaviorist control of children and parent communication. Now being expanded for hybrid learning.

ClassDojo got its start after Chaudhary, a teacher turned consultant for McKinsey, met Don, a self-taught programmer who had worked as a developer on the RuneScape online game franchise before returning to university to pursue a computer science Ph.D. Both 25 at the time, and with a similar entrepreneurial itch, they discovered a common interest in building new technology for educators. Just three months after meeting, the two moved together to California’s Bay Area to attend an education-focused accelerator now part of Y Combinator, called Imagine K12, in 2011.

Parents have no clue what is coming.

The ones paying attention to Lynn Davenport on Stemuli do, but yes - most are clueless. I don’t really trust Ben Williamson, but he has done some useful work on this. From 2017. ClassDojo app takes mindfulness to scale in public education | code acts in education