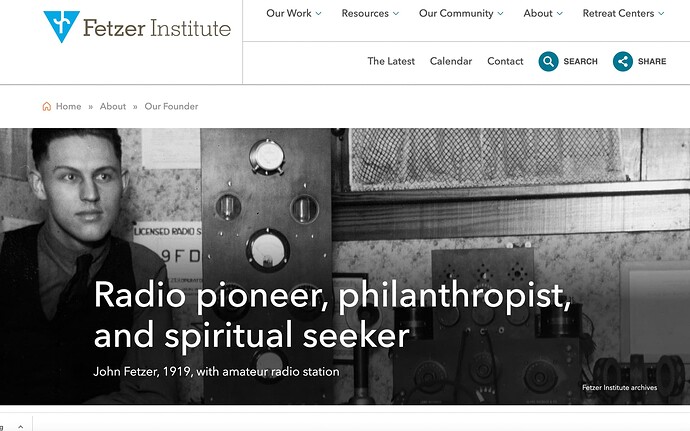 Starting a placeholder thread here. Someone in yesterday’s chat on the Biden presentation mentioned John Fetzer, an innovator in radio communications in the 1920s who was part of signals intelligence / censorship during WWII and was later involved in a variety of spiritual quests - some esoteric and some traditional.

John Earl Fetzer (1901-1991), was familiar with the call of the sacred within the secular. Trained as an electrical engineer, he began his career in 1931 by designing, building, and operating his own radio station that he then expanded into a...

The Fetzer Institute in Kalamazoo, MI is pushing all sorts of “solutions” around democracy and spiritual well being - all with data metrics attached, of course.

"During World War II, he was appointed the national radio censor for the U.S. Office of Censorship and created voluntary censorship of more than 900 radio stations so that they would not broadcast information that would be beneficial to the enemy. When the war started to wind down, Fetzer began asking for smaller and smaller budgets to run the office and began firing the 15,000 people employed by the office. When the war ended, he closed up shop and stored all the information in the basement of the National Archives. He said, “I’m convinced if we hadn’t, the Office of Censorship would still be with us today, and I shudder to think how powerful it might be.”

Fetzer’s own broadcasting empire grew during the war and spread from Kalamazoo to Grand Rapids, Nebraska and Peoria. He formed the Fetzer Music Corporation and acquired the Muzak franchise for out-state Michigan in 1958. Inevitably, he would get into the new medium, television, and established Fetzer Cablevision, eventually, in Kalamazoo. That has since become Charter Communications that serves the cable needs of the Kalamazoo area."

“In August of 1987, Fetzer moved his foundation and its staff of nearly 30 to new headquarters overlooking Dustin Lake on West KL Avenue in Oshtemo Township. The structure is an equilateral triangle shape representing the three connections he believed in. His interest in parapsychology and spirituality began at an early age, and he claimed to have had several spiritual experiences that influenced his later life.”

I just got the audio book on Fetzer. Talk by the author here: 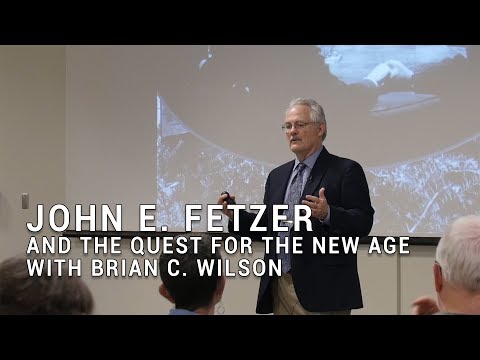 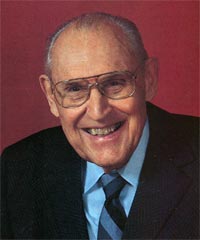 When John E. Fetzer died on 20 February 1991, he left a life replete with the legacy of a broadcasting empire, a World Series winning baseball club, philanthropy, and exploration of the mystical fringes of science.

I’d like to look into Kalamazoo more as it is the home of the “Kalamazoo Promise,” a social program that seems nice on the surface - free college for low income kids who get good grades. But I think it was laying the foundation for cradle to career pathways linked to UBI.

The Kalamazoo Promise is a pledge by a group of anonymous donors to pay up to 100 percent of tuition at many Michigan colleges and universities for graduates of the Kalamazoo Public Schools school district of Kalamazoo, Michigan. The Kalamazoo Promise applies to all of Michigan's state colleges and universities, as well as the 15 private colleges of the Michigan College Alliance and several apprenticeships and skilled trade programs. To receive the minimum 65% benefit, students must have li The p...

Our Team — The Kalamazoo Promise

While The Promise is funded by a group of anonymous donors, we’re backed by a team of professionals who are on the ground, working for The Promise every day.

There was some link to Swarthmore and Quakers that I lost and hoped to find again. Oops I think this is it. Don Cooney.

Donald F. Cooney is a six-term elected Kalamazoo City Commissioner in Kalamazoo, Michigan, United States. He is also a professor at Western Michigan University's School of Social Work and 2008 Democratic nominee for United States Representative of Michigan's 6th congressional district running against Republican Fred Upton. He also ran in the 2010 election. Cooney is originally from Philadelphia, Pennsylvania, where he was an ordained priest and community organizer and worked with Cesar Chavez's... 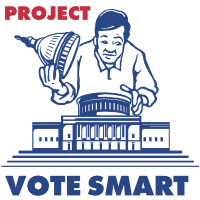 The Voter's Self Defense System

William F. Scandling (1922-2005) (“Bill”): Born in 1922 in Rochester, New York, Mr. Scandling served three years active duty in the Army Air Force from early 1943 to December 1945. After his military service, Scandling entered Hobart College where along with the other two founders began what was to become the SAGA Corporation in November, 1948, and earned his Bachelor of Arts degree in economics in 1949.

During SAGA’s early years, Scandling mainly stayed in Geneva to manage Hobart and William Smith Dining Services. In 1957 he became Secretary Treasurer of the firm, and in 1962, he joined his fellow founders in California when the national headquarters moved there, and became Vice President of Finance. He held that position until 1965, when he became Senior Vice President, and in 1968 Scandling was named President of the Corporation. He remained president until 1978 when the founders and the Board of Directors brought in Ernest C. Arbuckle and later Charles Lynch. At that time Scandling, with Anderson and Laughlin, became a Founder Director.

The Saga Foundation (based in Kalamazoo) website features a letter from Gerald Ford about the Interaction Council - a global coordinated body started in 1983 that dealt in Universal Human Rights. Seems it has ties to Stanford’s Hoover Institute. Bill Laughlin listed as a guest participant in 2005. Also a focus on nuclear disarmament, which to me is setting up next-gen nuclear. Logo similar to Trilateral Commission. Founder Japanese Prime Minister at the time Fukeda.

Oh look - there’s the set up for the Rio Summit.

" * The Council held four expert group meetings during the latter half of the 1980s (‘87, ‘88, ‘89 and ‘90) related to the environment and ecology, warning of the danger of “greenhouse effects” and urging that an international conference be convened on global ecological issues to set target values for the emission of CO2, among others. This led to the Rio Summit in 1992 and eventually to the Kyoto Protocol of 1998."

" * The Council repeatedly endorsed, in the late 1980s, the creation of a European central bank system and a single European currency. The European Central Bank was created in 1998 and the Euro was introduced in 2002."

"The Council’s greatest foresightedness was to take up the role of religions in our world and the need for a universal ethical standard. During the height of the Cold War, when religion was regarded as a non-factor in world politics, the Council convened a meeting, in 1987, with religious leaders in Rome, Italy. "

" * In 1996-97, with its concern that globalization of the world economy was matched by globalization of many of the world’s problems, the Council declared that globalization also applied to the necessity for global ethical standards, since without ethics and self-restraint, humankind would revert to the jungle. It identified the “Golden Rule” as an ethical standard common to all major religions that make a collective life possible. And the Council built on the earlier work of the Rome Statement by codifying the assumption of a common ethical base in a “Universal Declaration of Human Responsibilities." While the declaration has not attained the initial objective of being adopted at the UN as a twin document of the Human Rights Declaration, it has been broadly discussed all over the world and has become widely acclaimed as an important torchlight in the 21st century."

"In the final year of the 20th century, the Council envisioned responsible and enlightened leadership in the new century. Key elements were identified, such as the determination to change society in a way that would benefit society as a whole and to provide accountability and transparency in decision-making. "

"In 2002, the Council began focusing on international law. While the Council asked the international community to show understanding to the US as it reacted to the 9/11 assaults, it also underscored the dangers of an exclusively unilateral approach in countering terrorism. It emphasized the importance of the UN in preserving the international rule of law. "

“In 2007, to mark the 25th anniversary of the InterAction Council, a dialogue with leaders of the world’s major religions was held on how to restore world religions as a force for peace, justice and ethics. Religious leaders have a significant role to play in harnessing the power of people to face global problems.” 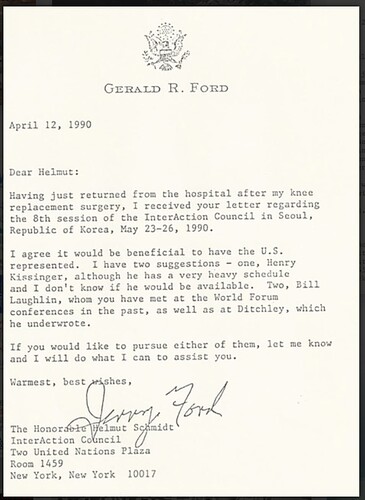 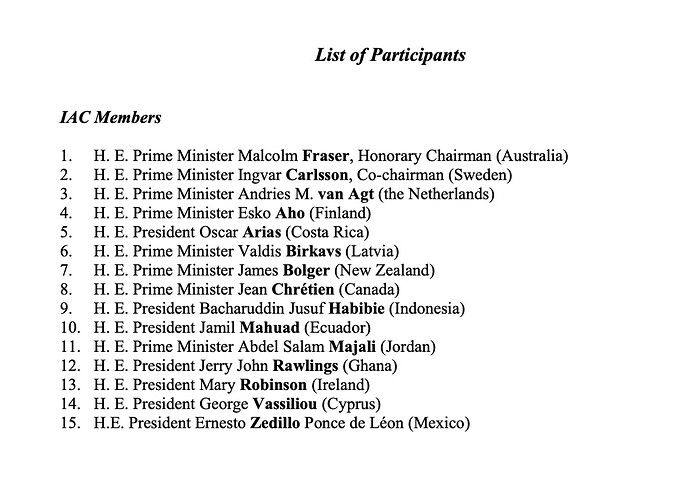 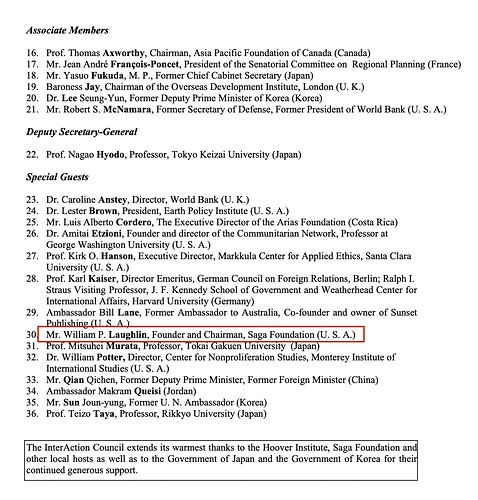 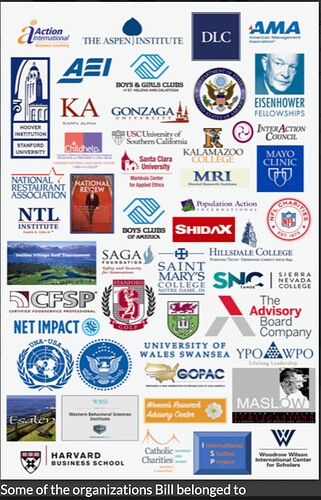