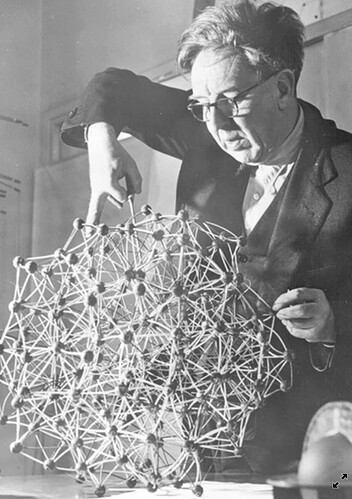 JD Bernal’s book, " The World, the Flesh and the Devil " came in the mail today.

“He imagines the future conquest of nature as a conquest of space: we will live, Bernal claims, in small globes among the planets, bounding through open space across low-gravity plains. As for the human body, it will extend its life as a brain in a cylinder connected to the world by various wired and wireless mechanisms; not only that, but it will join itself to collective brains, which will change our perception of what it is to have a self since they will persist in some ineffable quiddity even as constituent parts join up or die off.” J. D. Bernal, The World, the Flesh, and the Devil – John Pistelli

@jenlake I presume he’s in your files somewhere @Stephers (graphite) also WWII associate with Solly Zuckerberg who spearheaded Climate Research Centre in Norwich at the end of his life @leo. 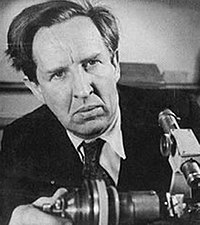 John Desmond Bernal FRS (/bərˈnɑːl/; 10 May 1901 – 15 September 1971) was an Irish scientist who pioneered the use of X-ray crystallography in molecular biology. He published extensively on the history of science. In addition, Bernal wrote popular books on science and society. He was a communist activist and a member of the Communist Party of Great Britain (CPGB). His family was Irish, of mixed Spanish, Portuguese and Italian Sephardic origin on his father's side (his grandfather Jacob Genese,...

“In 1924 he determined the structure of graphite (the Bernal stacking describes the registry of two graphite planes) and also did work on the crystal structure of bronze.[17] His strength was in analysis as much as experimental method, and his mathematical and practical treatment of determining crystal structure was widely studied, but he also developed an X-ray spectro-goniometer.[18”

He also worked on the structure of liquid water, showing the boomerang shape of its molecule (1933).

"At Cambridge, he also became known as “Sage”, a nickname given to him about 1920 by a young woman working in Charles Kay Ogden’s Bookshop at the corner of Bridge Street.[16]

“With the outbreak of World War II in 1939, Bernal joined the Ministry of Home Security, where he brought in Solly Zuckerman to carry out the first proper analyses of the effects of enemy bombing and of explosions on animals and people.”

“In the early 1960s, Bernal returned to the subject of the origin of life, analysing meteorites for evidence of complex molecules, and to the topic of the structure of liquids, which he talked about in his Bakerian lecture in 1962.[[22]]”(J. D. Bernal - Wikipedia)

" His 1929 work The World, the Flesh and the Devil has been called “the most brilliant attempt at scientific prediction ever made” by Arthur C. Clarke.[34] It is famous for having been the first to propose the so-called Bernal sphere, a type of space habitat intended for permanent residence. The second chapter explores radical changes to human bodies and intelligence and the third discusses the impact of these on society."

I learned a few things about Bernal writing up an intro to him for a blog series in the context of the ‘story of DNA’ involving crystallographer Rosalind Franklin, who was left out of the 1953 DNA-structure discovery team of Crick-Watson-and-Wilkins. Bernal arranged for Franklin to leave that group at Cambridge and come to Birkbeck College University London under his supervision to work on structural biology with an emphasis on tobacco mosaic virus (TMV) and poliovirus.

Here’s the skinny: John Desmond ‘J.D.’ Bernal (b1901-d1971) graduated from Emmanuel College, University of Cambridge (London) in 1922 at the age of 21 with a degree in mathematics. From there he was sponsored at the Royal Society’s Faraday Laboratory by William Henry Bragg to learn the art of crystallography (X-ray diffraction physics) and was set to work for the British government studying the structure of graphite. In 1927, he returned to Cambridge as a lecturer in crystallography and by 1934 was made assistant director of the Cavendish Lab. Bernal began studying organic molecules at the Cavendish; oestrin and cholesterol (1929); vitamin B1 and liquid water (1933); pepsin(1934), vitamin D2 (1935) and Tobacco Mosaic Virus in 1937. His doctoral students included Dorothy Crowfoot Hodgkin, who became his confidant and lover, Alan Mackay and Max Perutz. His nickname in these years became ‘Sage’. Denied a fellowship at the Cavendish in 1937 by Ernest Rutherford, Bernal was invited to Birkbeck, University of London, where he assumed the laboratory developed by Patrick Blackett and moved into the apartment upstairs. He was honored with membership in the Royal Society. After the war, Bernal’s lab expanded to become the Biomolecular Research Laboratory (BRL), set up in two buildings on the University’s Torrington Square, becoming in the process an arm of the British government’s Medical Research Council (MRC). The spirited atmosphere of Birkbeck under Bernal’s influence led to a continuously dynamic interplay of politics and science carried on nightly among students and visitors. Bernal is remembered for his war work (advising heads-of-state and planning for D-Day), his devotion to Soviet communism (which caused ‘distancing’ from his peers in the mid-fifties) and his legacy of books and articles.

—obviously didn’t go deep but I’m interested to hear about Bernal’s predictions for our brains. I’m noticing here, too, that it looks like Bernal left the Cavendish Lab at Cambridge near the same time Ernest Rutherford died unexpectedly.

Among other things, Rutherford predicted the attainment of nuclear power and weapons after his own successful step-wise experiments proved the early concepts by 1906. A decade later in 1916, in the midst of WWI, he took vocal opposition to nuclear development, suggesting humans should work out their problems on sharing the planet first. Rutherford, chief of the Cavendish, did not like ‘assistant director’ Bernal.

“Ernest Rutherford, 1st Baron Rutherford of Nelson, (30 August 1871 – 19 October 1937) was a New Zealand physicist who came to be known as the father of nuclear physics.[3] Encyclopædia Britannica considers him to be the greatest experimentalist since Michael Faraday (1791–1867).[3] Apart from his work in his homeland, he spent a substantial amount of his career abroad, in both Canada and the United Kingdom…” Ernest Rutherford - Wikipedia